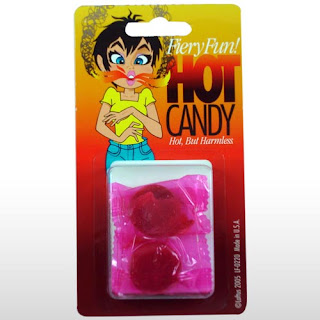 Hot relative to what? I mean, if I'm going to prank somebody with a supposedly spicy candy, I don't want to drop the cash, wait for it in the mail, set up the rube real nice to where he's just DYING for a piece of sweet, sweet, sweets, and then find out it has all the mouth-burning power of a pack of Big Red. I want it to be HOT, goddamnit. I want, at minimum, his tongue to melt out of his mouth like a pan-fried popsicle. I want him to begin frantically searching for a glass of water and then, when he can't find one (because I've soldered all the faucet handles into their off position), I want him to begin frantically searching for a knife to cut his own throat. I demand suffering from my pranks, or where the fuck is the fun? If they're merely chagrined or mildly challenged, you might as well just punch them in the face. Save you the trouble.

All I'm saying is a little info re: the capsicum content would be nice. 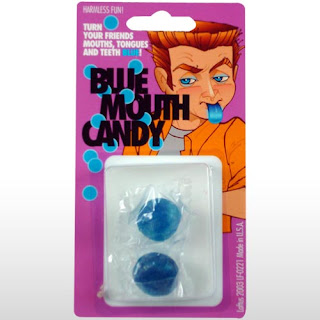 This has probably sky-rocketed in popularity since Avatar, especially with those dorks that fetishized those freaky blue bastards to the point where the Real Doll company had to start production on a full line of Na'avi fuck dolls because the special requests were getting out of hand. So really this isn't much of a prank. It's more a means to end for the sad folks out there that wish to simulate the aftermath of a fictional alien busting a nut in their greasy maw.

I mean, I guess you could use this as a prank. "Oooh... your mouth is blue now... it looks like you ate something... um... blue!" That would probably amuse fourth graders. Or maybe really religious Dads who think tinting the mouths of their mortally embarrassed children is how you let that long-dormant wacky streak roar.

I don't know. This is worthless and its creators are worthless. 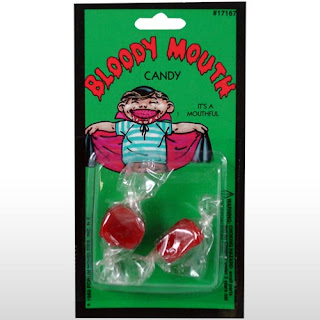 Let me first quote from the advertising text:

This trick candy looks real, but when you eat it, your mouth becomes filled with a blood-like substance.

WHAT? Why... I mean, I can think of a million uses for this, but that's mainly because I'm a horribly cruel person who enjoys making people believe that they're dying from internal parasites (you eventually have to discover what makes YOU happy and then just reach for that glistening diamond every day, otherwise life is a gray wasteland of "considering the feelings of others" and "not being awful to everyone" and then you die, having wasted your life).

I think really the part that bugs me is the phrase "blood-like substance." What IS the substance? And why isn't it... you know... ACTUALLY blood? I mean, don't be pussies. If you're going for blood, GO FOR BLOOD. Maybe some of it is infected with Hepatitis? I mean LET'S DO THIS SHIT FOR REALS!!!

Otherwise you've got a victim with a mouthful of corn syrup (or whatever) who will never respect you ever again. You'll have no choice at that point but to kill him. 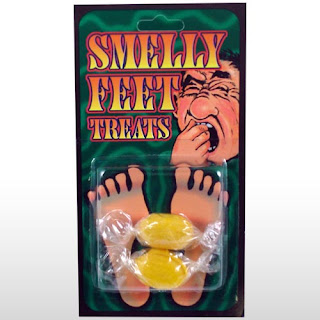 This is disappointing because I thought that it was a candy that GAVE you smelly feet. That's psychological warfare like nobody's business... giving them an innocent candy and then, hours later, they don't get laid because their feet stink like a dead hobo's balls. That's brilliant because they would have NO IDEA. And you'd keep giving them candy and their life would slowly crash around them, relationships and employment opportunities and their once-loving family now merely flaming wreckage strewn about the metaphorical highway, all thanks to their stank-ass feet. You would laugh your ASS OFF for like months.

But no. Sadly, this is just candy that tastes like smelly feet. What a fucking waste of a diabolical concept. 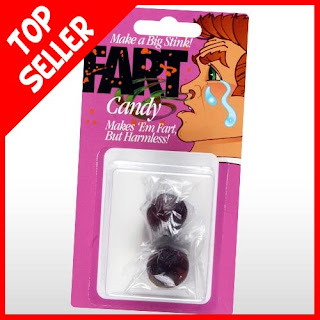 Okay, first off, there's no way this works. AT ALL. Because if it did, it would be the best-selling product of all time, surpassing even the Snuggie and Coke and coke and McDonald's chicken nuggets. Because, I mean really, who doesn't want to make their rivals fart up a goddamn hurricane at their bidding?

There's a market for that, clearly; this is a totally bullshit product and it's already one of the top-selling products from the extremely shady "prank warehouse" website where I got these pictures (I'm not going to link to it because I don't want to be the one that gave your computer AIDS).

But, okay... whatever. It's candy that has... what... beans in it? Garlic? Broccoli juice or something? I mean, like it matters. It's not going to happen, no matter what they say is packed into its cellophane wrapper. It fronts it will leave your victim "with uncontrollable farts." I'd wager the only thing uncontrollable will be your rage at a rip-off company that would claim a bowel-shredding prank nirvana and deliver only (maybe) a weak, one-cheek sneak.
Posted by C-dog at 4:27 PM

C-dog
I am The Way and The Light and also a very good drunk.